The people behind the Flag - Adam Jackson

The UK Ship Register (UKSR) is committed to delivering round-the-clock personalised service, consistently improving our offer, and ensuring we remain at the front of the shipping industry for all our customers. But we could not deliver this level of service or remain as one of the best-performing flag states, without all the dedicated people behind the scenes here at the UKSR.
Today, we’d like to introduce you to – Adam Jackson, Head of Large Yacht Services.

Adam Jackson (pictured below) gained a degree in Naval Architecture from Strathclyde University in 1998. A strong family connection with the sea and shipping then led him on the unusual path of starting a late cadetship with P&O Cruises at the age of 21. Adam gained his limited Chief Engineers Certificate of Competency from the MCA and sailed on numerous ship types as an Engineering Officer reaching the rank of 2nd Engineer before moving ashore in 2005.

Adam relocated to the USA with his future wife where he took up work for a large luxury yacht builders based on the West Coast. As a Naval Architect and Systems Engineer, he helped to drive innovation in areas such as Fire Protection of GRP construction at the yard.

In 2009 when Adam and his family relocated back to the UK and Adam went back to sea on-board P&O Ferries sailing out of Hull on the same ships that he had spent many days aboard as a child when his uncle had sailed as Master.

In 2012, Adam decided to come ashore permanently and became an Maritime Coastguard Agency (MCA) Surveyor at the Hull Marine Office. After 5 years of Port State Control inspections, Passenger Ship surveys and a whole range of other surveys, inspections and audits, Adam was promoted to his current role as Head of Large Yacht Services for the MCA. He now heads the team of specialist yacht surveyors and support staff that look after all MCA’s interests in the Large Yacht sector.

What are the core responsibilities/duties of your role?

"Providing the highest possible level of customer service to MCA's Large Yacht industry clients such as builders, owners, crew, and managers. Part of that service is fulfilling all duties as a Flag Administration for UKSR Large Yacht customers; as well as regulatory duties as MCA large yacht technical specialist. I also manage the team of surveyors and business support staff at Large Yacht Services (LYS)."

What do you enjoy about working for the MCA?

"Being onboard yachts and other vessels during surveys and meeting with customers in the marine industry. The autonomy to be able to provide yacht customers with the service that they expect. And the respect shown to me as an MCA surveyor by seafarers when I demonstrate LYS expected behaviours."

What has been your proudest moment/biggest achievement at the MCA?

"When working as a Marine Office surveyor, I offered my help to the Yacht Unit (Ensign at the time) due to my background and experience. After helping for a while I was offered the position as head of the unit temporarily whilst recruiting for the retired head. I then passed the board for the position and was offered the permanent role. The MCAs recognition of what I could bring to the role is my proudest moment."

What are your looking forward to in your role with the MCA?

"Greater recognition within the yacht sector of the value of the UK Flag and MCA involvement in their operations. Seeing this recognition reflected in more yachts considering UK Flag and demonstrating to new customers, who may have preconceived opinions of the MCA, how we have changed. This moment of recognition is what I look forward to the most." 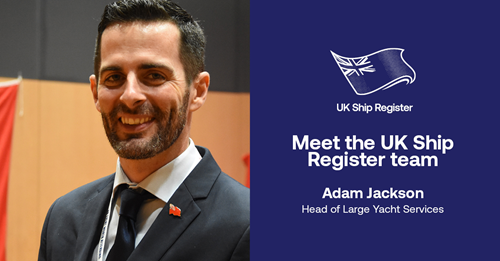 To speak to Adam and find out more about the UK Flag, you can connect on LinkedIn or alternatively, click here to email him directly.

The 4th edition of the Master’s Guide – Large Yacht Edition is here. Alongside additional guidance and explaining new requirements, the electronic format also contains active links to supporting websites, documents, and M Notices, and has been updated for the REG Large Yacht Code.