There was twice the cause for celebration as two deserving officers were named as Officer Trainee of the Year by the Maritime and Coastguard Agency.

The challenges presented by Covid 19 meant that the award ceremony planned for 2020 was delayed, so the top trainees of 2020 and 2021 received their awards at the UK Chamber of Shipping Annual Dinner on Monday 7 February at JW Marriott Hotel, London.

Gregor Connor (pictured below), from Glasgow, was named as Maritime & Coastguard Agency Officer Trainee of the Year 2020 after being nominated by the City of Glasgow College, along with his sponsoring company the Ship Safe Training Group Ltd. and P&O Ferries. 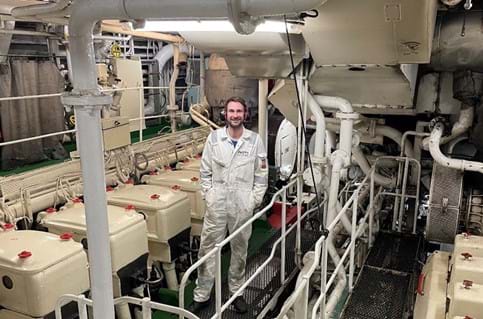 The award was collected on his behalf as Gregor, who has been working for P&O Ferries as a fourth engineer since January 2021, is currently at sea.

Gregor was inspired to join the maritime industry after seeing friends and family working at sea and, despite not having experience with either engines or ships, put his all into learning everything he could about the industry.

He said: “There’s a piece of advice I was given which has always stuck with me – ‘become passionate about it and it becomes easier to learn’.”

He added that he was delighted to have been nominated and then chosen for the award, saying: “It is great to be recognised and rewarded for the efforts and hard work I have put in throughout my cadetship. Winning the MCA Officer Trainee of the Year Award 2020 is not only a great personal achievement, but is also good for future employment as an indication of my work ethic.”

Gabriel Verne (pictured below), an engineer on a private motor yacht, was named as the Maritime & Coastguard Agency Officer Trainee of the Year 2021. 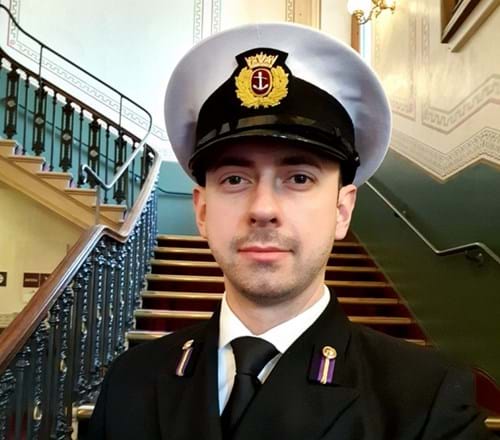 He was nominated by Warsash Maritime School, part of Solent University along with his sponsoring company Ship Safe Training Group Ltd. and A.P. Moller – Maersk A/S.

Gabriel was inspired to pursue a career in maritime after moving to the South Coast from Poland at the age of 12. He said “I spent my teenage years in Bournemouth, forever changing my attitude towards the sea. I cannot imagine ever being away from the seaside for any long period of time.”

Although he spent a few years working in various industries after finishing college, the draw of the sea was never far away, and he embarked upon an Engineering Cadetship in September 2018.

Gabriel said: “I wanted to be able to learn a trade that would enable me to earn a living while travelling the world and that's exactly what the Merchant Navy offered. I’m now fully qualified to embark on an amazing adventure that this career brings and hungry for more experience.”

Speaking about his nomination and win Gabriel said: “I feel genuine delight and gratification and it is undoubtedly thanks to the efforts of the lecturers, close friends and fellow cadets that have enabled me to get to where I am now.”

He said: “It is such an honour to present these awards to these two seafarers who are clearly so passionate about what they do.

“Both Gregor and Gabriel have shown incredible commitment and worked extremely hard and I’m proud that we’re able to recognise their dedication through these richly deserved awards.”